Do Employers Have The Right To Control What Nurses Post On Social Media? 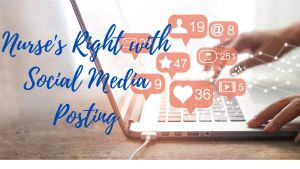 A nurse based in North Carolina lost her job in June 2020 because of the seemingly controversial content she posted in her TikTok account. Ironically, people were quick to judge her professional conduct from watching short video clips, including the hospital that fired her, yet she has never been on the receiving end of formal complaints from patients. Do employers have the right to control what nurses post on social media?

Should I Hide My Social Media From Employers?

The idea of ghosting your social media accounts seems logical since employers tend to feel entitled to snoop into nurses’ private lives. Let’s look at the possible gains of shielding your online profiles from employers in the healthcare industry.

1. Employers Cannot Judge You Based On Your Private Social Media Posting

In 2017, CareerBuilder conducted research that revealed almost 40% of employees in every industry unknowingly get discriminated against in job interviews, because they posted themselves on social media enjoying a beer or smoking a joint. This is despite residing in states that have legalized recreational marijuana.

Although they are not allowed to use those social media posts we know now that the prospective employers do check and do judge.

It’s quite shocking to know that an employer can reduce your chances of getting hired by 40% over an innocent photo you took while on vacation. Especially in situations where job candidates have remarkable performance records from previous medical facilities and have never shown up to work while chemically impaired.

2. Some Employers Are Extremely Sensitive Over Politics and Religion

In virtually every culture, religion serves as the yardstick for measuring a person’s consciousness towards ethics and moral values. That’s why some employers with staunch religious beliefs don’t take lightly to social media memes that poke fun at their deities or certain aspects of their practices.

On the other hand, mainstream comedians and TV shows seemingly appear unscathed whenever broadcasting content that makes fun of specific religions or their followers. Plus, it doesn’t make sense to discriminate against employees over their religious views yet medical institutions are considered socially neutral ground.

There are situations where it’s okay for nurses to go on social media and speak on certain issues without fearing any repercussions from employers. News reports in May 2021 revealed that nurses in most parts of Michigan struggled with a lack of sufficient Personal Protective Equipment (PPE) required to offer medical care to patients diagnosed with the deadly COVID19 virus.

In this situation, it’s okay for nurses to post on social media about the lack of essential equipment without mentioning their employers. However, some job recruiters feel that such communications threaten the public image of the employer and use this as a reason to reject job applications of job candidates that have ever posted such content.

On the other hand, at least 80% of job recruiters use social media to conduct background checks on potential employees. That’s why Human Resource managers feel skeptical about hiring nurses that have little to no social media presence.

2. Minimizes The Chances Of Getting Job Opportunities Through Referrals

One advantage of job referrals is that they take place in informal settings such as parties. It’s also easy to get hired because the potential employer feels confident in the decision based on the trust they have in a mutual friend that serves as the connection.

When an employer gets a suggestion about a particular nurse, the first thing he or she does is check the candidate’s profiles on LinkedIn as well as Facebook, Twitter, or Instagram. However, the mutual trust can decline significantly if the suggested candidate lacks an online presence.

3. It’s Okay For Employers To Have A Look At Your Social Media Profiles

Now that you understand how easy it is to miss out on a job opportunity due to religious memes or vacation photos, make sure you clean your pages to avoid offending job recruiters.